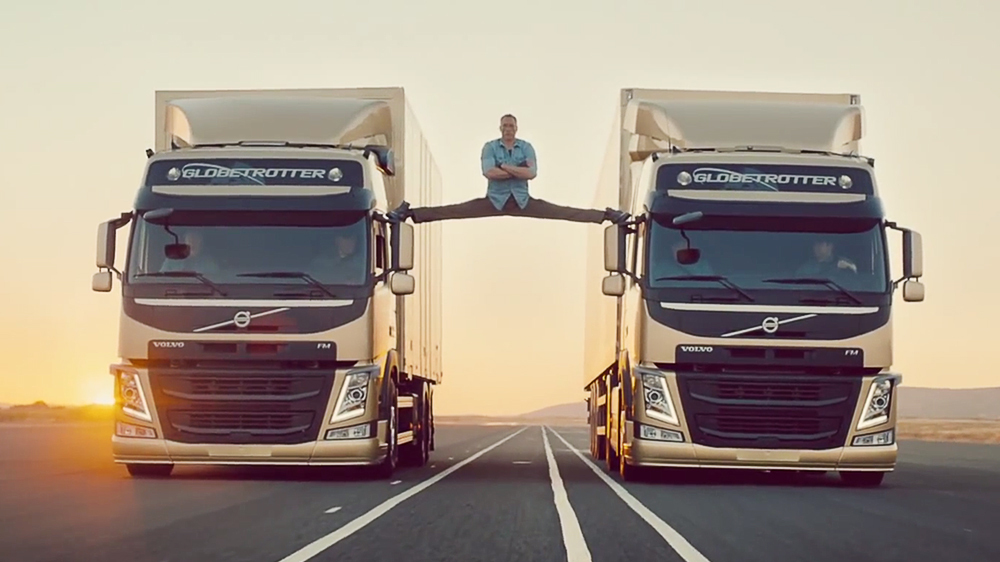 In late 2013, Volvo released a commercial starring Jean-Claude Van Damme, called the “Epic Split”. The commercial was created by the Swedish advertising agency, Forsman & Bodenfors, and it was the sixth commercial in a series produced by the agency for Volvo, called “Live Test”.

In case you haven’t seen the commercial before, I would suggest taking a look at it below because the rest of this blog is going to go pretty deep into how the psychology of the commercial affects the genders differently.

If you are male, please pay extra attention to how your body is feeling throughout the ad, because that would be highly relevant once we get into why this commercial is actually amazing, and it’s not why you think.

How the Epic Split was produced

Epic Split was shot on a runway in a closed airport in Spain and it was directed by Andreas Nilsson. The planning of the 75-second commercial took over five months. And yes, they had figured out how to keep Van Damme safe – he was protected by a hidden safety harness and wire which ensured that he would be safe even if something went wrong

“…we had him rigged so that if he would fall off he wouldn’t die obviously. We didn’t want to be responsible for killing the Muscles from Brussels.”

Van Damme was also supported by two platforms fitted behind the mirrors of each truck. The trucks were driven in reverse at a speed of 25 km/h and each truck had co-drivers helping the main drivers. To ensure there weren’t any continuity errors regarding the position of the sunset, the entire thing had to be shot in one single take.

The song featured in the commercial is “Only Time” by Enya. It gave the commercial an almost spiritual essence as if Van Damme was a monk performing a sacred ritual, one that is only made possible due to the excellent balance and stability provided by Volvo Dynamic Steering.

The script is also beautiful and underrated. It is poetic, clear, and yet ambiguous. It elevated the commercial from being just a man doing a split supported by two Volvo trucks to an artistic expression, a meditation on splits. This expression was missing in the other commercials in the Live Test series, which is one of the reasons why it stands out.

In my opinion, the next time they shoot a time capsule into space, they should include a high-def recording of this commercial – to show the human spirit and what it is capable of. But then again, I also feel that good advertising can actually change the world.

I’ve had my ups and downs, my fair share of dumpy roads and heavy winds. That’s what made me what I am today. Now I stand here before you. What you see is a body crafted to perfection. A pair of legs engineered to defy the laws of physics. And a mindset to master the most epic of splits.

How successful was the Epic Split?

The commercial got 40 million views within 16 days of its release online. By late 2014, it was estimated that the commercial generated $170 million for Volvo while costing only 3-4 million dollars to produce.

“Only Time” was pushed back into the Billboard Top 100 thirteen years after its release, and eventually reached number 43. In a survey of over 2,000 truck drivers, half of those who saw the video wanted to buy a Volvo, and a third of them had already made the purchase.

Interestingly, out of all the commercials in the Live Test series, Epic Split was the most attention-grabbing commercial but it was also the least effective in causing immediate action.

It also won a few awards including “Best in Show” award in May 2014 and a Black Pencil award from the Design and Art Direction design awards in 2014. In 2015, it was also awarded a prize for Creative Effectiveness at the Cannes Lions International Festival of Creativity.

Epic Split left an impact on popular culture too, being subject to quite a few parodies but we’ll cover that later in this blog. For now, let’s take a look at one of the most interesting aspects about the commercial – why men and women are affected differently by the ad and how.

Here’s a video by AdWeek that shows the results of “Neuro-Insight Memory Encoding Timeseries analysis” to track the “memory encoding” levels of male viewers who watched the commercial.

Without getting too much into, the analysis basically helps us understand how effectively we’re retaining the information that we’re being shown through the commercial. You ideally want your core marketing message to be shown at a time when the audience is highly receptive. This analysis helps us in understanding how receptive the audience is at every second of the commercial.

The stronger memory is, the more effective the ad will be at that specific point in time. In other words, for an ad to have any effect, the right moments must be committed to memory. Memory is the principle, validated measure of advertising performance and success. Ideally, an effective TVC will hit 0.70 or higher (one a scale of 0 – 1.0) during specific branding & messaging points within the ad.

If you were paying attention, you would have noticed that the levels shoot up right when the main text of the commercial is shown. It is definitely not a co-incidence as the entire point of advertisement is to focus on the main marketing message which, in this case, is “Volvo Dynamic Steering”. The graph shows how the typical man reacts to the act – at first, he starts out at normal and then as he starts anticipating the pain, his encoding level starts dropping but eventually, he realizes he’s going to be okay and the encoding levels shoot up to the highest levels.

At that moment of relief, with Van Damme at full split and a beautiful sunset in the background, the male viewer realizes everything will be okay with Enya’s soothing tones in the background. And that’s when he sees the main message, what the commercial wants him to remember – “Volvo Dynamic Steering“. The commercial literally takes him through a journey of emotions and puts the message through to him right when he’s most vulnerable to it.

This is no special phenomenon, but just good film-making. Most commercials use research and science to carefully craft each moment of the commercial in order to generate the maximum impact.

What’s interesting in the case of Epic Split is that women viewers tend to have a different experience with the ad. Here’s the same analysis when done on female viewers:

Women are more intrigued and engaged in what is happening during the ‘split’ sequence – dramatically different to our male responses, which in turn, plays out very differently during the final message sequence as well. At the very point where males become highly engaged, women completely lose interest. The effectiveness of the final message and branding is much shorter and significantly lower with females.

When men watch the Epic Split, they anticipate pain when they see Van Damme and understand what he’s about to do. When the split starts, men are usually thinking about how much pain Van Damme must be feeling, while women are excited and intrigued by the split. At this point, the male viewers were not very receptive to the commercial while the female viewers were very engaged.

Once the camera starts panning back and we see that Van Damme is okay, men feel relief and become highly receptive while women are kind of bored with the entire thing by now.

Since the marketing message is placed in a way that affects men more, the ad responded better with male viewers than female viewers.

Volvo wanted to go viral with the Live Test series and this commercial was one of the most viral videos of 2013 which is crazy because it was intended to be a B2B commercial!

It also left an impact on popular culture at large. Within a week of the commercial’s release, there was a face-swapped version being distributed that featured “disgraced Toronto mayor Rob Ford“. There were also a number of other parodies with one famously featuring Chuck Norris and another featuring Channing Tatum.

Other notable commercials from the Test Drive series

Even though Epic Split was the most viewed commercial out of the entire series, there were some other ones that were pretty well-made too. Here’s two of my favorites from the series.

I often like writing about commercials because I’m actually a huge fan of them, and I (not ironically) believe that great commercials are just as powerful as iconic movies. If you like this article, you might like my other posts on the subject of commercials and advertising:

* On the outstanding Gorilla that saved Cadbury in 2007